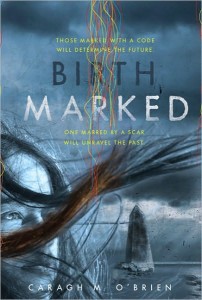 Synopsis (From Goodreads): After climate change, on the north shore of Unlake Superior, a dystopian world is divided between those who live inside the wall, and those, like sixteen-year-old midwife Gaia Stone, who live outside. It’s Gaia’s job to “advance” a quota of infants from poverty into the walled Enclave, until the night one agonized mother objects, and Gaia’s parents are arrested.  Badly scarred since childhood, Gaia is a strong, resourceful loner who begins to question her society. As Gaia’s efforts to save her parents take her within the wall, she herself is arrested and imprisoned. Fraught with difficult moral choices and rich with intricate layers of codes, BIRTHMARKED explores a colorful, cruel, eerily familiar world where one girl can make all the difference, and a real hero makes her own moral code.

My Thoughts: I read this book through in one sitting, it was that interesting.  Immediately upon starting the book the reader is thrust straight into Gaia’s world – right as she is performing her first solo delivery, in fact.  The author has managed to capture the emotion of that moment, both the good and bad, without making it seem forced.  It remains so throughout the book, as the author’s writing simply flows forward into this remarkably well-paced story of love, learning, intrigue, and scandal.  What I especially loved about this novel was that O’Brien really did not pull any punches.  She’s not afraid to address birth, death, or relationships.  And though this is definitely a Young Adult novel, it’s written in such a way that adults can easily enjoy it – the language is not so simplistic that it makes you feel like you’re reading something meant for a 4th grader.  Also, I was really surprised to find out that this is the author’s debut novel – it certainly doesn’t read like one.  Best of all, the ending is set up perfectly for a sequel, so I’m hoping against hope that there’s one coming soon.  That said, though, it’s perfectly fine read as a standalone novel.  Lovely book!

I’m aiming for “Level 2” which is 2-4 dystopian novels read between October 1st and December 19th.  This is the 1st one for the challenge.  I -love- dystopian stories!