Life As We Knew It by Susan Beth Pfeffer

Title: Life As We Knew It 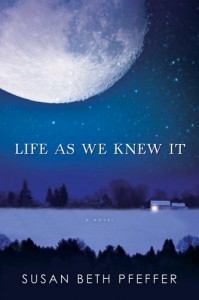 Synopsis (From Goodreads): It’s almost the end of Miranda’s sophomore year in high school, and her journal reflects the busy life of a typical teenager: conversations with friends, fights with mom, and fervent hopes for a driver’s license. When Miranda first begins hearing the reports of a meteor on a collision course with the moon, it hardly seems worth a mention in her diary. But after the meteor hits, pushing the moon off its axis and causing worldwide earthquakes, tsunamis, and volcanoes, all the things Miranda used to take for granted begin to disappear. Food and gas shortages, along with extreme weather changes, come to her small Pennsylvania town; and Miranda’s voice is by turns petulant, angry, and finally resigned, as her family is forced to make tough choices while they consider their increasingly limited options. Yet even as suspicious neighbors stockpile food in anticipation of a looming winter without heat or electricity, Miranda knows that that her future is still hers to decide even if life as she knew it is over.

My Thoughts: While at first I was slightly dismayed at the format of this novel – it’s written as Miranda’s journal with dated entries – I got used to it quickly.  The reader is easily able to see through Miranda’s eyes, even though obviously none of us have experienced such apocalyptic happenings. You really feel for her, her family, and the world.

Now, what I really appreciated about this novel was the amount of basic “realism” that Pfeffer kept.  Yes, a meteor hits the moon and yes the moon goes off kilter…that’s slightly hard to believe (though I suppose plausible).  But what happens after the fact DOES make sense for if the moon actually was thrust off its axis. Extreme tide changes, weather pattern disruption, increased volcanic activity, all of that – COULD have been affected by the moon being, well, broken.  I very much dislike disaster movies that blame the end of the world on some Godlike happening.  Mayan calendars of doom.  Psychic predictions.  All silly.  And Pfeffer was wise enough to stay away from it.  Thank goodness.  And really, now that I’ve pondered on it a while, I think telling it in journal form was well done.  I don’t think she could have really managed to portray the depth of emotion that she was able to attain with the journal by just telling the story.  As we follow Miranda’s story as Miranda experiences it, we feel, we learn, we imagine.  Now I feel like I should go stock up on batteries…and bottled water…

I’m aiming for “Level 2” which is 2-4 dystopian novels read between October 1st and December 19th. This is my 2nd for the challenge.

Hi-stopping over from the blog hop. Have you checked out The Reapers Are the Angels by Alden Bell? My store doesn’t shelve it as YA, but I have seen it designated as such. It’s a rather sophisticated, and truly gorgeous, post-apocalyptic road tale. The heroine is a most decidely unbellaesque young woman named Temple-illiterate poet/warrior/traveler…anyway, here’s my review, if you’re interested.

I’m your newest follower. I’d love it if you’d follow in return!

PS What was your first YA dystopian book for the challenge? I love dystopian/post-apocalyptic literature…I even have a tab for it on my site.

I hope you read the 2 sequels! This series is seriously one of my all-time favorites. And I agree completely that she managed to avoid all the apocalypse type stuff out there right now.

I love that idea of the challenge — I’ve just already read so many dystopian that I don’t know what’s left!