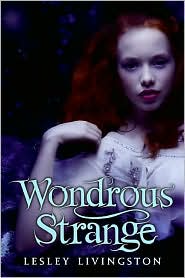 Synopsis (From Goodreads): 17 year-old Kelley Winslow doesn’t believe in Faeries. Not unless they’re the kind that you find in a theatre, spouting Shakespeare—the kind that Kelley so desperately wishes she could be: onstage, under lights, with a pair of sparkly wings strapped to her shoulders. But as the understudy in a two-bit, hopelessly off-off-Broadway production of A Midsummer Night’s Dream, wishing is probably the closest she’s going to get to becoming a Faerie Queen. At least, that’s what she thinks… In this fun, urban fantasy, Kelley’s off-stage life suddenly becomes as complicated as one of Shakespeare’s plot twists when a nighttime trip to Central Park holds more than meets the mortal eye.

My Thoughts:  While I did enjoy the story, there were parts of it that I felt were rushed, and/or needed a bit more development.  I liked that Kelley was not immediately accepting of her new big life change, but I felt like after she accepted her fate, things began to move at a pace that was just too fast.  Some of the dialogue between characters (Kelley and her Aunt) is simply unbelievable and obviously contrived, and the relationship between Kelley and Sonny seemed a trifle forced. The perspective shifts some between Kelley and Sonny, but is done well enough that it isn’t obnoxious at all.  The ending was decent, though the major action literally took up around a page and I feel leaves the reader going “What? That’s it?”. That said, though, the story was entirely easy to read and easy to like. I’ll be reading the sequel, Darklight, for sure.