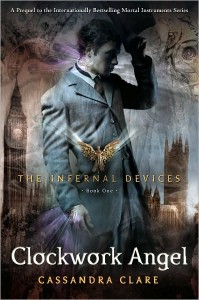 Synopsis (From Goodreads): When sixteen-year-old Tessa Gray crosses the ocean to find her brother, her destination is England, the time is the reign of Queen Victoria, and something terrifying is waiting for her in London’s Downworld, where vampires, warlocks and other supernatural folk stalk the gaslit streets. Only the Shadowhunters, warriors dedicated to ridding the world of demons, keep order amidst the chaos… (and there’s more, but you can click through to read the rest)

My Thoughts: Out of all the books I’ve reviewed so far for my blog, this one has been the most difficult for me…and I’m not even certain why.  The book was -not- bad.  The plot seemed engaging enough, the characters were formed well enough to be either likable or detestable.  The writing and editing was sufficient.  The story itself, though…I felt it was a little “been there, done that”.  Unfortunately, from the very beginning of the book, I was bored.  I managed to read four other novels during the time it took me to finish this one, and in the end I had to simply force myself to ignore all other books and -finish- Clockwork Angel.  I want to reiterate, though, that this novel was NOT a bad book.  I think, honestly, that it just wasn’t my cup of tea.

That said, though…a lot of bloggers whose opinions I respect and who read a lot of the same things I do, and who like the same things I do – well, they’ve loved this book.  I just -didn’t-. It felt very Harry Potter-ish, except not quite as lovely as Harry Potter. Tessa has about as much personality as Bella from Twilight at the beginning of the book, though she does actually gain some by the end of the book.

What I did like: the clockwork gadgets.  I loved the idea of the automatons, and the little pendant that Tessa wears is SO NEAT.  But…what, really, does the pendant have to do with the story? It plays a part on one page out of several hundred.  I’m assuming more will be revealed about it in the next book in the series, but…I won’t be reading it to find out.  Too little, too late, I think.

Hmm I’m no longer so keen to read this! Might wait til the Library gets it in I think