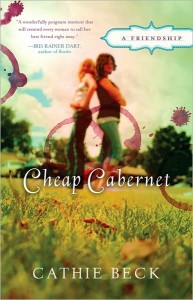 Synopsis (From Goodreads): I didn’t know that people come into our lives, and sometimes, if we’re terribly lucky, we get the chance to love them, that sometimes they stay, that sometimes you can, truly, depend on them. Cathie Beck was in her late thirties and finally able to exhale after a lifetime of just trying to get by. A teenage mother harboring vivid memories of her own hardscrabble childhood, Cathie had spent years doing whatever it took to give her children the stability–or at least the illusion of it–that she’d never had. More than that, through sheer will and determination, she had educated them and herself too. With her kids in college, Cathie was at last ready to have some fun. The only problem was that she had no idea how to do it and no friends to do it with. So she put an ad in the paper for a made-up women’s group: WOW . . . Women on the Way. Eight women showed up that first night, and out of that group a friendship formed, one of those meteoric, passionate, stand-by-you friendships that come around once in a lifetime and change you forever . . . if you’re lucky.

My Thoughts: There’s always that one book, that one story, that tugs at your heart strings and sucks you in in such a way that you can’t stop thinking about it even weeks after you’ve read it.  Cheap Cabernet is, at least for me, one of those stories.  This book truly has it all.  The voice of the narrator, Cathie Beck herself, is filled with honesty, poignancy, grief, hilarity, and a richness that really catches and holds the reader’s attention.  Denise is her best and dearest friend and the love and bond that these two women share is a beautiful thing.  THIS is an author who can make you truly feel that you are in the story.  And while you know that you cannot possibly BE one of this pair, this dynamic duo of women, you do feel as though you are experiencing the joys, the sorrows, the love, the fear that they are feeling.  This book made me laugh and sob in turn, and it is one that I will read again and again.  Cathie Beck, you are an inspiration, and Denise…what a beautiful, beautiful person.  Thank you for letting me have a glimpse into such a special friendship.

Keep up the good work, I like your writing.

You’ve JUST made one Colorado’s MONTH! I cannot thank you enough.

You “get” this book in a LARGE WAY!