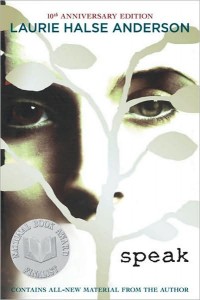 Synopsis (From Goodreads): Since the beginning of the school year, high school freshman Melinda has found that it’s been getting harder and harder for her to speak out loud: “My throat is always sore, my lips raw…. Every time I try to talk to my parents or a teacher, I sputter or freeze…. It’s like I have some kind of spastic laryngitis.” What could have caused Melinda to suddenly fall mute? Could it be due to the fact that no one at school is speaking to her because she called the cops and got everyone busted at the seniors’ big end-of-summer party? Or maybe it’s because her parents’ only form of communication is Post-It notes written on their way out the door to their nine-to-whenever jobs. While Melinda is bothered by these things, deep down she knows the real reason why she’s been struck mute…

My Thoughts: Until September 18, 2010, I had never heard of the book Speak by Laurie Halse Anderson.  On that day, an evil little man posted an opinion piece recommending that it be banned from a Missouri school system.  In response, I bought the book.   Last night, I read it.  I read it cover to cover without putting it down, sometimes reading a passage several times because the poignancy, the feeling, the heart in those words was just too much to give it a mere single pass-over.  This, my friends, is a GOOD book.  Yes, the subject matter is, to some, controversial.  Yes, it’s a tough read for anyone who has a shred of emotion in their bodies.  But it makes you -think- and it tugs the reader into a deeper understanding of the isolation, fear, depression, confusion, and utter despair that this child, these children (for there are victims like Melinda everywhere and more joining her ranks, sadly, daily) feel.  This is a book that I think every High Schooler should read.  This is a book that I think every Adult should read.  Speak is stunning, volatile, refreshing…and I will read it again, and again, and again.

My darling friend Bree over at 1girl2manybooks has reviewed Speak, as well.

Wow, high praise! I’ve been back and forth on reading this one, feeling a little out of the loop as it’s circulating every book blog out there except mine. I’ve been weary because I don’t read YA very often (by very often I mean never). I’ve got to say this great review has given me a push. Thanks 🙂

Speak – Laurie Halse Anderson « All The Books I Can Read