This World We Live In by Susan Beth Pfeffer

Title: This World We Live In 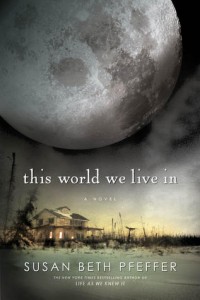 Synopsis (From Goodreads): It’s been over a month since Miranda Evans has written in her diary, a month of relative calm for her and her family. It’s springtime, and with warmer weather comes rain, and the melting of the winter’s snow. The shad are running in a nearby river, and Miranda’s brothers Matt and Jon leave home for a few days to see if they can catch some to supplement their food supply.
When they return, Matt brings with him a girl named Syl, who he introduces as his bride. But that’s not the only shock Miranda and her family have to deal with. A few weeks later, Miranda’s father, stepmother, and baby brother show up at her door. Accompanying them are three strangers, a man named Charlie Rutherford, and two teenagers, Alex and Julie Morales. These five people have crossed America together, becoming, in their own way, a family…

My Thoughts: Again, I’ve had to take a while to compile my thoughts before writing a review.  Usually, I just -know- what it is about a book that I love, or hate.  It’s not so easy with this one.  Miranda is far less of a whiner in this book, which is good.  Alex is still stoic and strong and wonderful (I say this even though I did not initially enjoy the second book as well as the first…that has since changed).  Matt…oh, Matt.  What happened to strong, capable Matt?  Instead, he’s a whimpering beast.  Jon has grown some, which is good, but he’s still just a child in a strange world.  And really, that’s all I can say about this book that I haven’t already said in my reviews of the other books.  There is the struggle for electricity.  There is the struggle for food.  There’s the inevitable fighting and whining that happens when groups of adults are forced to share such close quarters and limited supplies.  But really, that’s it.  Nothing happens in this book that doesn’t happen in the other books.  Or, well, it does – but it happens in the last 15 pages of the book and is mostly irrelevant.  I should have gone with my first instinct and stopped reading after book 1.  That said, though – it wasn’t horrible. If I read it as a stand alone, I’d probably have given it a higher rating.

Bellaesque Rating: Miranda certainly isn’t.  None of the women in these novels seem to be, which is quite refreshing.

I’m aiming for “Level 2” which is 2-4 dystopian novels read between October 1st and December 19th. This is my 4th for the challenge.  Guess I made the challenge!  Still have several to read for it…will be bumping up to Level 3, I suppose.

🙁 I’m sad you didn’t like it. Not because it matters but because I loved the series.

I would say you’re right though, and that the first was the best.

I think I loved the series so much because I read the first two before the author wrote the third and then followed her writing process as she wrote the third. It felt more personal doing it that way, really. 😀

I actually didn’t -hate- the 2nd two, I just didn’t love them as much as I liked the 1st one (even though Miranda was a touch whiny in the first). It’s probably more to do with the fact that I read them one after the other and didn’t get any break in between. Probably shouldn’t have done that. Each of them, though, would be fine as standalone books. 🙂

This could not possilby have been more helpful!