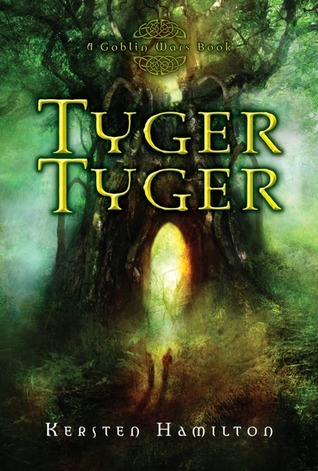 Synopsis (From Goodreads): Teagan Wylltson’s best friend, Abby, dreams that horrifying creatures–goblins, shape-shifters, and beings of unearthly beauty but terrible cruelty–are hunting Teagan. Abby is always coming up with crazy stuff, though, so Teagan isn’t worried. Her life isn’t in danger. In fact, it’s perfect. She’s on track for a college scholarship. She has a great job. She’s focused on school, work, and her future. No boys, no heartaches, no problems.
Until Finn Mac Cumhaill arrives. Finn’s a bit on the unearthly beautiful side himself. He has a killer accent and a knee-weakening smile. And either he’s crazy or he’s been haunting Abby’s dreams, because he’s talking about goblins, too . . . and about being The Mac Cumhaill, born to fight all goblin-kind. Finn knows a thing or two about fighting. Which is a very good thing, because this time, Abby’s right. The goblins are coming.

My Thoughts: I want to begin by saying that Tyger Tyger is an interesting read.  It’s not entirely cookie-cutter and I appreciate that aspect.  That said, though, I finished this book feeling absolutely unfulfilled.

The beginning of the book talks of Teagan’s work with CIndy the chimp. There’s of course no mention of the chimpanzee in the middle because of all the “action” happening, but then we return to her…only for it to end with no real explanation of what the purpose of the relationship was to begin with.  It seems the entire situation was just filler.

My favorite character by far was Aiden, Teagan’s little brother.  His magical singing ability was entirely fun and he was just too cute for words as a supporting character.  Finn was likable, for the most part, and his superior fighting abilities were cleverly worked in.  I still, though, don’t really know how to feel about Teagan herself.

The Irish folklore was fun to read about, and the -idea- of goblins was interesting. However, I felt like the folklore was there as a prop and to me the goblins did not seem like much more than creepy fairies.

In general, the uneven pacing of the book, the forced (and massive) introduction of information at the beginning, and the lackluster writing quality really dampened my enjoyment of the book.  Will I read the sequel? Perhaps, if it is also on NetGalley.  Would I buy it? Certainly not.