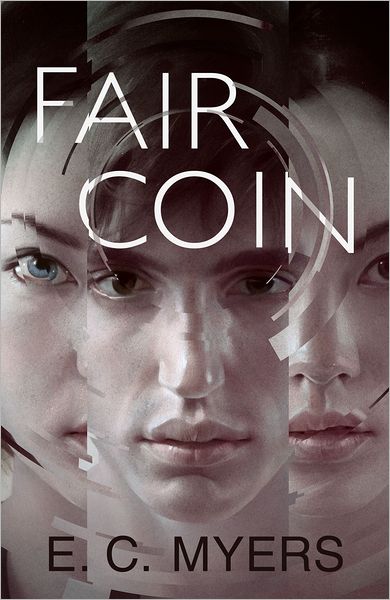 Where’d I Get It: From the publisher

Synopsis (From Goodreads): Sixteen-year-old Ephraim Scott is horrified when he comes home from school and finds his mother unconscious at the kitchen table, clutching a bottle of pills. The reason for her suicide attempt is even more disturbing: she thought she’d identified Ephraim’s body at the hospital that day.

Among his dead double’s belongings, Ephraim finds a strange coin—a coin that grants wishes when he flips it. With a flick of his thumb, he can turn his alcoholic mother into a model parent and catch the eye of the girl he’s liked since second grade. But the coin doesn’t always change things for the better. And a bad flip can destroy other people’s lives as easily as it rebuilds his own.

The coin could give Ephraim everything he’s ever wanted—if he learns to control its power before his luck runs out.

My Thoughts: Ephraim Scott, “Eph” to his friends, is a typical teenage boy living a typical (sadly, it -is- fairly common for children to deal with this situation) life.  He isn’t entirely happy, but he does seem to be coping; he has friends, he’s performing at an at least average level in school, and has a job that the reader can assume he appreciates.  Truthfully, though, he’s a boy who is hurting and he’s all too eager to step away from his not-so-idyllic life.

When he gets the opportunity to do so, he leaps at the chance. It’s through wishes and hopes and chance that Ephraim makes his way through the twists and turns of Mr. Myers fast-paced plot, and it’s really fun to try to figure out just what is going on and why.

What is not so typical about the story is the author’s portrayal of the teen mindset.  Ephraim is a young man with strong morals and willpower, though these traits only become truly apparent as we get further into the story.  There is character growth (though it’s gradual and not entirely deep) with all three of the “main” characters: Ephraim, Nathan, and Jena.  Jena is written as a girl with a brain who knows how to use it, Nathan is a many-layered personality, and Ephraim really has to evaluate his life, his choices, his feelings – his entire self. It’s interesting to watch it all unfold. As the book ends, Ephraim comes to the realization that life is what we make of it and that it’s each person’s responsibility to either stay the course or make changes.  It’s a really good lesson, albeit a subtle one.

I loved that despite having a male author, a male main character, and just an in general kind of “guy” feel to it, the female characters have strong, independent voices.  They may be mainly supporting characters, but they are important and they are not pushed into the shadows willy-nilly. What did bug me, quite a lot in fact (though it was not a huge part of the story), was when Ephraim and Jena pretty much blatantly ignore an act of abuse against a friend*.

There are a few bits of the book that make me scratch my head – portions I feel like were glossed over – such as the emotional reactions, or lack thereof, that two particular characters have to losing a friend. It’s a minor flaw, and not one I think takes anything away from the overall story. Also, I feel like there a few unanswered questions dangling there in the open, just waiting…and I’m hoping the sequel answers them for us.

E.C. Myers has written a novel that makes the reader think, which is something that is, sadly, often lacking in the Young Adult genre. He has not over simplified the SciFi aspects of the novel, showing that he has faith in the intelligence and comprehension levels of the young adults reading his novel, which is really rather great of him. Fair Coin is a young adult novel of substance. It is humorous, emotional, and complex in a refreshing way, and I think it’s a book that anyone who enjoys Science Fiction could really love.

* – Ok, younglings. If you think/suspect a friend is being abused either physically or mentally, be it by a boyfriend or girlfriend, teacher, parent, the school bully, go tell someone.  Guidance counselors are there for a reason. Tell your parents. Tell the principal. Really, it’s ok to tell. Don’t turn a blind eye to it.