A Fistful of Collars by Spencer Quinn 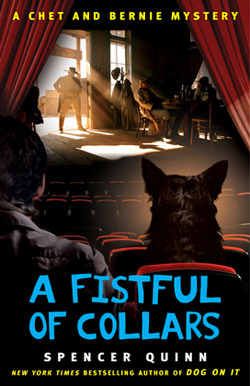 Where’d I Get It: NetGalley.com

Synopsis (From Goodreads): Everyone’s favorite detective team returns in a new adventure as canine narrator Chet and his human partner P.I. Bernie Little find that Hollywood has gone to the dogs. Hoping to bring some Tinseltown money to the Valley, the mayor lures a movie studio to town to shoot their next production, a big-budget Western in the classic tradition. The star is none other than ruggedly handsome—and notoriously badly behaved—Thad Perry. When the mayor decides that someone needs to keep an eye on Thad so that he doesn’t get into too much trouble, Bernie and Chet are handpicked for the job. The money is good but something smells fishy, and what should have been a simple matter of babysitting soon gets more complicated—especially when they discover that Thad has a mysterious connection to the Valley that nobody wants to talk about. What kind of secret could Thad have left behind when he went to Hollywood to seek fame and fortune? The only people who might know the answer have a bad habit of turning up dead before they can talk.

As Bernie’s relationship with his longtime girlfriend Suzie goes long-distance, and Chet’s late-night assignations appear to have resulted in an unexpected dividend, it’s all our two sleuths can do to keep Thad and his motley entourage of yes-men, handlers, and hangers-on in their sights. Worst of all, Thad is a self-proclaimed cat person, and his feline friend Brando has taken an instant dislike to Chet.

Like the winning books before it, this fifth book in the series combines a top-notch mystery with genuine humor and a perceptive take on the relationship between human and dog that will stay with you long after the case is solved.

Lindsay’s Thoughts: This is the fifth book of the series, and my first time delving into the world of Bernie and Chet, and I was pleasantly surprised.  I’m a huge dog lover, just ask my three spoiled pooches, so I LOVED that the book was told from the viewpoint of Chet, the side kick to the Little Detective Agency.  I hope my dogs love me as much as Chet loves Bernie!

It was easy to delve into this book despite it being in the middle of a series, I feel like there was very little that was I missing from previous books.  The series just seems to be kind of like an episode of a television show, where you can pick up where you left off or start in the middle and not really miss anything, kind of like daytime television. Ha!

The story wasn’t exactly new or super exciting but the writing from Chet’s eyes definitely gave it a unique twist that kept me turning the page, wondering what Chet was going to do next!

I just have to tell you your blogger profile is hilarious, and this book cover is something new. I like it!

What a great blog! 🙂

🙂
From the Kozy Korner,
Kimberly
KimberlysKozyKorner.blogspot.com

Ha! I love the punny title. I’ve never encountered this author before, but since my dog is sitting in my lap right now it must be an omen.