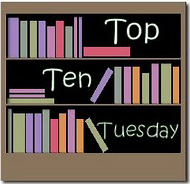 I’m participating in Top Ten Tuesday again this week.  It’s a weekly meme hosted by The Broke and the Bookish, and it’s always a lot of fun.  This week’s theme is:

I loved ROOM! A very clever book dealing with a horrible topic… it should be at the top of everyone’s To Be Read list! I hope you love it as much as I did when you do read it.

Most of these are new to me. I like that.

I LOVED Christopher Pike growing up too! I still have all my books, tucked safely away for my little girls to devour once they get a bit older.

And, thanks for the list– there’s a lot that I haven’t heard of. 😉