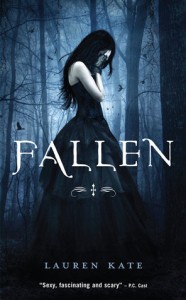 Synopsis (From Goodreads): There’s something achingly familiar about Daniel Grigori.

Mysterious and aloof, he captures Luce Price’s attention from the moment she sees him on her first day at the Sword & Cross boarding school in sultry Savannah, Georgia. He’s the one bright spot in a place where cell phones are forbidden, the other students are all screw-ups, and security cameras watch every move.

Even though Daniel wants nothing to do with Luce–and goes out of his way to make that very clear–she can’t let it go. Drawn to him like a moth to a flame, she has to find out what Daniel is so desperate to keep secret . . . even if it kills her.

My Thoughts: I really had to take a moment to get my mind around what I read in Fallen.  I’m still not entirely certain how I feel about it, but I’m going to review it as best I can.  Within the first 100 pages of the book (and it’s nearly 500 pages long), the reader (or any reader with half a brain) knows exactly what’s going to happen and why.  The fact that our darling protagonist doesn’t have a clue what the heck is going on really just makes you want to sit her down and give her a good long talk about not being absolutely and totally obtuse.  The writing was okay, though really I’m beginning to think that either today’s “Young Adults” are dumb as bricks or authors are just writing as if they are.  I didn’t have to think about a single thing, it’s all spelled out there for you.

What really got me, though, was the simpering wallflower named Luce who is supposed to be our protagonist.  Not only does she just let her absolutely stunningly sexy hot super duper fantastic crush speak to her like she’s a toddler, but she puts up with him doing things like -flipping her off-, blatantly ignoring her, and otherwise treating her as if she’s dirt beneath his feet.  I know as a teenager, if my current crush had done that kind of moronic crud, I’d not have looked at him ever again.  What happened to lead females with a little bit of gumption and self respect?

Ugh.  Well, at least it wasn’t about faeries.  I do like faeries, but after reading Wondrous Strange, Darklight, Wings, and soon Spells – I’m a little tired of faeries, ya know?  The thing is, the basic story had promise.  I was so very excited to read about fallen angels and all that good stuff, only to be utterly disappointed at the lack of actual…angel stuff.  At any rate, I’ll probably read the sequel, Torment, just to see what happens next – but I won’t be buying any of the books.

Rating: 4 of 10, Protagonist is definitely Bellaesque.  No doubt about it.

I didn’t love the story it was too slow for my taste but the last 100 pages were really good.