Thirst No. 3: The Eternal Dawn by Christopher Pike

Title: Thirst No. 3: The Eternal Dawn 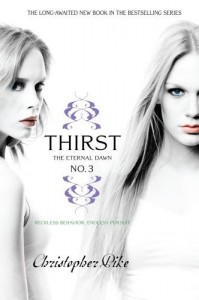 Synopsis (From Goodreads): Alisa has spent the past five thousand years as a vampire, living alone and fighting for survival. In her loneliness, Alisa cannot resist bringing Teri—a descendant of her human family—into her life. But Alisa is surrounded by death and destruction, and just by knowing Alisa, Teri’s life is at risk.

Alisa’s guilt grows when she becomes involved in a dangerous conspiracy. A top-secret group knows Alisa’s secret and will stop at nothing to use her powers for their cause. As Alisa desperately tries to protect herself and Teri from the unknown enemy, she discovers a force more powerful and more lethal than anything she has ever seen. Alisa doesn’t know who to trust, who to challenge, or who she will become….

My Thoughts: Christopher Pike’s The Last Vampire series was one of my favorite things to read as a  youngster.  I purchased each book as it hit the shelves and devoured them gleefully.  I was so terribly unhappy that the series ended in The Last Vampire: Creatures of Forever.  That said, however, the ending of that book, the end of the series, was perfect.  All the loose ends were tied up into a nice little bow.  All questions answered.  It was over.

Imagine my surprise (and from what I’ve seen by poking around the internet, the surprise of many) when I saw that there was going to be a 7th book.  What? But Sita’s story was over! Done! Finished! We, her devoted fans, knew precisely what happened, we knew her story, we knew the truth, we’d read THE END.   Boy were we fooled.

Like many others I wondered how, after such a solid ending to the series, Christopher Pike could bring Sita back into the limelight.  I imagined it would be stunningly brilliant, written eloquently and beautifully…the story would flow from the pages into my brain and I would sigh in utter bliss.

By the end of Chapter 2, I was so thoroughly and completely disgusted with the blatantly SILLY way that her story was brought back into play that I had to place my bookmark on the page, close the book, and walk away.

Of course, it’s -Sita-, man. You have to find out what happens to her, you have to see.  After a day or two, when my level of blah over the absolutely insanely boring explanation of things had reduced, I picked up the book again.

Boy am I glad I did.  I know that not everything Christopher Pike writes is a masterpiece.  At times the writing is choppy and occasionally the writing is repetitive in a way that makes me grit my teeth, but the story – ah the story!  By the end of Chapter 3 I was hooked.  I forgot, since it’s been nearly a decade since I’ve read Christopher Pike novels on a regular basis, that sometimes he starts slow.  But then the flow happens and you’re drawn into the tightly woven story that keeps you snugged tightly in its arms until it darn well chooses to release you.  For me, that was at the very last page, the whispered words that sealed that particular portion of the novel also assured that I will be anxiously awaiting, and pre-ordering, Thirst No. 4.   Yes, people, there’s another coming. Summer of 2011, it says.  Read stories 1 – 6 (or Thirst No 1 and Thirst No 2), Read Thirst No. 3: The Eternal Dawn.  Sita dazzles, but not in that sparkly glittery craptastic way that Dear Eddie does…I promise you’ll be enchanted.

I’m here to cheer you on for Readathon, so if you’re busy reading don’t forget to take some time to rest!

And even though I’m well past my teen years, I still read Christopher Pike. His adult novel Falling is one of my all time favorites, and his newest YA novel, The Secret of Ka, is on my Kindle and waiting to be read this Readathon. I almost bought the Last Vampire 3, but I really need to re-read the series, I forget how it ended! But thanks to your review, I will get around to it. Of course, there’s not much I won’t read by Pike. 🙂

I just finished Thirst #3 and I love it. I’m still confused on how she was a vampire again. I mean she killed Yaksha before he was born and now she’s a vamp and never left Seymore my head is spinning. The Epilouge was the best part of the entire book it through me for a loop to think Sita was dead but no she took Terie’s body. Wonder if Matt knows and how did she do it hope fully i’ll find out next book!

never met seymore not left my bad. I wish Kalika was still be alive though. Her character was awsome. Thirst is a mystery through and through you can never predict waht happens next because it is never what you expected. Lookin forward to Four.

this book is soooo good.christopher pike is such a good author. his books are so mysterious you can never predict whats going to happen. im looking forward to reading thirst no 3

Im not really understanding the Seymore thing. They have never met? I dont understand that

I am NOT a reader in any way, but i read Whisper of Death and was so amazed on how Christopher Pike wrote things so detailed it made you picture them as if you were there. Then I read The Last Vampire I was so hooked! I had to go to 2 different libraries to get the whole 6 book series and refused to put them down do needless to say I’m on the edge of my seat trying to find a store near me with the newest book Thirst no 3 The eternal Dawn. I also read their releasing a movie based on The Last Vampire & I WILL be there opening night you can bet on it…