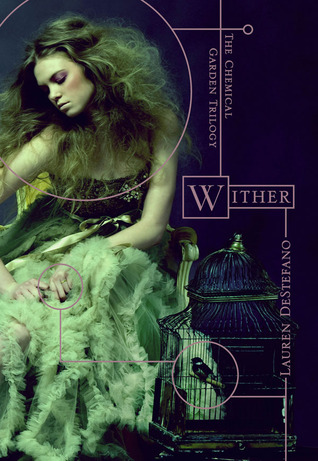 When sixteen-year-old Rhine Ellery is taken by the Gatherers to become a bride, she enters a world of wealth and privilege. Despite her husband Linden’s genuine love for her, and a tenuous trust among her sister wives, Rhine has one purpose: to escape—to find her twin brother and go home.

But Rhine has more to contend with than losing her freedom. Linden’s eccentric father is bent on finding an antidote to the genetic virus that is getting closer to taking his son, even if it means collecting corpses in order to test his experiments. With the help of Gabriel, a servant Rhine is growing dangerously attracted to, Rhine attempts to break free, in the limted time she has left.

My Thoughts: Lauren DeStefano may have just become one of my favorite authors.  She introduces the reader to a horrifyingly dark, dismal, and BELIEVABLE world from page 1 and continues to deliver throughout the novel.  Rhine, the female protagonist, is a brutally real, honest, and deep character who is likely to appeal to most readers – or at least readers who like a woman with a brain in her head.

The world is Earth, though not at we know it, and supposedly the only remaining continent is North America.  Everywhere else is supposed decimated, though there are hints throughout the book that this may just be what the general population believes to be true, and is in fact NOT entirely accurate.  Ms. DeStefano’s characters, from the chef in the kitchen of the home in which Rhine lives to Rhine herself are all intricately woven into the story in such a way that they just -feel- real. Even Rowan, who we never actually meet, feels like he’s got depth and substance.

I absolutely love the level of detail that the author worked into her story – there was plenty to really paint a vivid picture of what is happening and where it is happening, but enough was left to the imagination so that each reader can color it with his or her own individual interpretation.

It may sound cheesy and a trifle cliche, but I’d call this little dystopian beauty SPLENDID and absolutely delightful.  I cannot wait for number two in the Chemical Gardens trilogy. (Would it be too corny to say that I may wither away while waiting? Ooo look at that alliteration, too!)

Bella Factor: Not at all. She’s the anti-Bella.

This book looks so good! I really need to get my hands on a copy! 😀