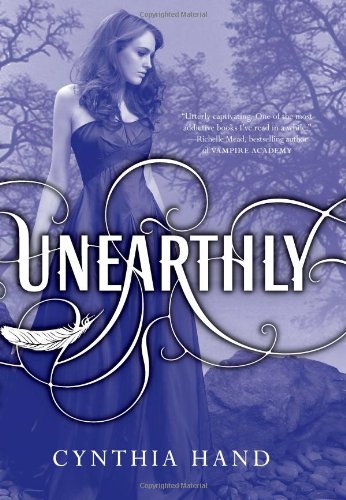 Synopsis (From Goodreads): In the beginning, there’s a boy standing in the trees . . .
Clara Gardner has recently learned that she’s part angel. Having angel blood run through her veins not only makes her smarter, stronger, and faster than humans (a word, she realizes, that no longer applies to her), but it means she has a purpose, something she was put on this earth to do. Figuring out what that is, though, isn’t easy.
Her visions of a raging forest fire and an alluring stranger lead her to a new school in a new town. When she meets Christian, who turns out to be the boy of her dreams (literally), everything seems to fall into place—and out of place at the same time. Because there’s another guy, Tucker, who appeals to Clara’s less angelic side.
As Clara tries to find her way in a world she no longer understands, she encounters unseen dangers and choices she never thought she’d have to make—between honesty and deceit, love and duty, good and evil. When the fire from her vision finally ignites, will Clara be ready to face her destiny?

My Thoughts: I’m feeling slightly up and down on Cynthia Hand’s Unearthly.  On one hand, I definitely liked Clara – she has a lot of depth and it’s obvious Ms. Hand took the time to really flesh her out.  On the other hand, I really feel the novel was plagued by a lot of filler and not a lot of actual substance.

That said, I did very much like this book.  Clara is a female protagonist I can get behind and understand.  She’s a “typical” teenager in that she does in fact ponder about how she’s going to fit in, how she’s going to cope with a new school, new life, new everything…and she even whimpers a bit over her orange hair.  She’s so REAL.  At the same time, she’s so much more than the “typical” female protagonists that seem to run rampant in a lot of today’s YA novels.  Clara is strong, decisive, and independent.  She’s not willing to let a boy treat her like dirt – she has enough self esteem and feelings of self worth to really KNOW what she deserves, and she’s not willing to settle for less than that.  I adore that about her.

The supporting characters – Angela, Wendy, Christian, Tucker, Jeffrey, and Clara’s mom – are all interesting on their own. Also interesting is the lore behind the Angels and angel-bloods and I definitely would like to read more about that.

The ending of Unearthly, I felt, is a bit abrupt – I was absolutely not prepared for it to end.  While I enjoy a good cliffhanger as much as the next person, this was more of a…cessation of words?  It comes down to there being a whole lot of build up and not a whole lot of resolution.

That’s ok, though. I’ll still patiently wait for the next in the series.

I’ve been wondering about this one. I’ve seen such good reviews, but my gut was that it’s not for me even though I like paranormal. Thank you for your honest review.

I read this yesterday in one sitting and loved it! The second half much better than the first half. There are still a lot of unresolved questions, so I can’t wait for the sequel.