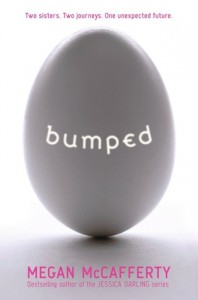 Synopsis (From Goodreads): When a virus makes everyone over the age of eighteen infertile, would-be parents are forced to pay teen girls to conceive and give birth to their children, making teens the most prized members of society.

Sixteen-year-old identical twins Melody and Harmony were separated at birth and had never met until the day Harmony shows up on Melody’s doorstep. Until now, the twins have followed completely opposite paths. Melody has scored an enviable conception contract with a couple called the Jaydens. While they are searching for the perfect partner for Melody to bump with, she is fighting her attraction to her best friend Zen, who is way too short for the job.

Harmony has spent her whole life in religious Goodside, preparing to be a wife and mother. She believes her calling is to bring Melody back to Goodside and convince her that “pregging” for profit is a sin. But Harmony has secrets of her own that she is running from.

When Melody is finally matched with the world-famous, genetically flawless Jondoe, both girls’ lives are changed forever. A case of mistaken identity takes them on a journey neither could have ever imagined, one that makes Melody and Harmony realize they have so much more than just DNA in common.

My Thoughts: Mmm, satire. How I heart thee…  and I kind of heart this book, because it’s filled to the brim with the beauty that is satirical writing.  Now, while I don’t believe this book was the best bit of literature ever written, I do believe it conveys an important message – extremes on issues such as teen pregnancy are a little asinine.

The nitty gritty on the book itself – well, I didn’t absolutely adore the writing style.  As far as grammatical errors, there was nothing that really made me cringe in horror.  The flow was decent.  But the voice…well, I just didn’t feel it.  Also, the pacing of the book was suuuuper slow.  I did not know until after I’d finished the book that it’s meant to be the first in a series, but even so – I really wish something more had happened within the 336 pages of text.  I’m not usually a fan of books that change perspective/narrator from chapter to chapter, but this one did so in a fairly tolerable manner.  It was also, obviously, necessary for the story – one twin is a part of an ultra-modern sex-is-a-good-thing subculture and the other is a part of an extremely religion oriented sex-after-marriage-only subculture.

As I said, this book is a work of satire, and Ms. McCafferty is mocking the EXTREMES that society has settled on.  Abstinence.  Ignoring Abstinence.  It doesn’t have to be one way or the other.  To me, at least, this book makes it quite obvious that some sort of middle ground needs to be found.  This could easily be a controversial book, and I’m not entirely sure what age bracket would get the most out of reading it, but I truly believe that the point made within its pages is a good one.  If you want to read a book full of fluff, this one isn’t for you.  If you want to read a book that will make you ponder for a while on an important issue, pick it up.  It’s an easy, fun read, so it should make that pondering quite tolerable for those who don’t want an intensely heavy story to plow through.

Bella Factor: Not so much.

I was all for it till the preachy bits at the end.