Across the Universe by Beth Revis 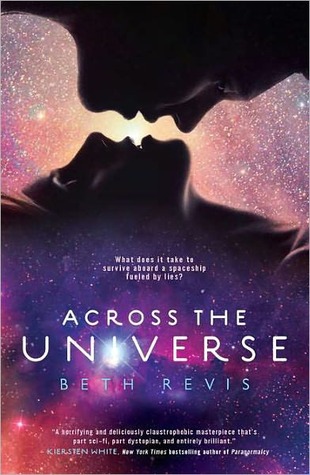 Synopsis (From Goodreads): Seventeen-year-old Amy joins her parents as frozen cargo aboard the vast spaceship Godspeed and expects to awaken on a new planet, three hundred years in the future. Never could she have known that her frozen slumber would come to an end fifty years too soon and that she would be thrust into the brave new world of a spaceship that lives by its own rules.

Amy quickly realizes that her awakening was no mere computer malfunction. Someone – one of the few thousand inhabitants of the spaceship – tried to kill her. And if Amy doesn’t do something soon, her parents will be next.

Now, Amy must race to unlock Godspeed’s hidden secrets. But out of her list of murder suspects, there’s only one who matters: Elder, the future leader of the ship and the love she could never have seen coming.

My Thoughts: Have you ever read Ringworld by Larry Niven?  I have, and I loved the books. I think Ms. Revis has, as well. Now, I could be wrong (obviously I definitely do not have any insider information on what Ms. Revis has or has not read in her lifetime), but I’m fairly certain that I can detect quite a few parallels to Mr. Niven’s books.  Now…I’m not implying she stole the story.  I’m not saying anything negative, in fact.  I’m merely saying that I think this book could have been at least partially influenced by bits and pieces of the Ringworld series of books.  There’s nothing wrong with that, is there?  As C.C. Colton said, “Imitation is the sincerest [form] of flattery”.

Enough of that.  Let’s get to the nitty gritty of things.  Our main characters are Elder, the future leader of the spaceship upon which this story takes place, and Amy; She’s  “nonessential cargo”.  Amy’s parents are also cargo, though not nonessential, and a cryogenically preserved while waiting for said spaceship to reach its destination.  There’s quite a few others waiting in a popsicle-like state in the cargo bit of the ship – 97 others, in fact.  So we have a ship full of people who have been traveling from point A to point B for a -very long time-, an up and coming new leader, a few crazies thrown in for good measure, and a plot that’s been done a few times before.  But that’s OKAY! Why? Because Beth Revis makes it seem fresh.  Also, this particular book is written in such a way that the younger crowd can really get into it.  It’s not quite so deep that you have to ponder for hours over it. It is, however, fun.

The chapters change character perspective throughout the book and honestly, I felt as though the book suffered a bit for this.  The voices of Amy and Elder sound oddly similar and that, to me, was a bit disappointing.  Perhaps if they were more noticeably different, the alternating voices would have worked.

All in all I feel the book was decently written, but it’s not one of my favorites. Enjoyable, yes; It’s a fun, light read.

I’ll read the sequel.  I’ll probably even like the sequel.  In the meantime, though, I’m going to go re-read Ringworld and its sequels and prequels, ’cause Across the Universe made me miss it.

To Purchase this book:  Amazon – Barnes & Noble – The Book Depository
(If you purchase through these links, Literary Obsession will receive a small percentage of the sale.  These sales help support giveaways on LiteraryObsession.com, so thank you if you do!)

I loved this book, just becasue of Harley, he is so sweeet!

You need to read A Million Suns – most everyone who felt ambivalent towards ATU felt that AMS was a million times better. I loved both books, but OMG I was up late at night finishing AMS and it seemed more emotional, more surprising, faster, and just all around better.