Daughter of the Centaurs by K.K. Ross 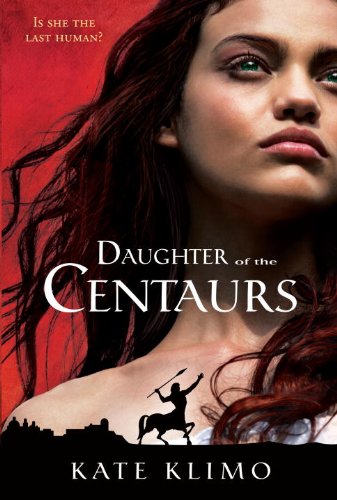 Where’d I Get It: eGalley from the Publisher

Synopsis (From Goodreads):  Malora knows what she was born to be: a horse wrangler and a hunter, just like her father. But when her people are massacred by batlike monsters called Leatherwings, Malora will need her horse skills just to survive. The last living human, Malora roams the wilderness at the head of a band of magnificent horses, relying only on her own wits, strength, and courage. When she is captured by a group of centaurs and taken to their city, Malora must decide whether the comforts of her new home and family are worth the parts of herself she must sacrifice to keep them.

Kate Klimo has masterfully created a new world, which at first seems to be an ancient one or perhaps another world altogether, but is in fact set on earth sometime far in the future.

My Thoughts: I read this book last year, so I just went through it very quickly again to refresh myself before writing this review.  First of all, I have to say – I generally don’t like to ‘judge a book by its cover’, but the first one I saw was just seriously cheesy.  I’m glad that the published version has had a huge makeover.  I probably shouldn’t have done the quick refresh, though, because I’m even more fuzzy over this book than I was before.

I wanted to love this book; It’s about Centaurs!  Horses are my ultimate favorite animal; I had horses growing up and we trained and competed on them. I still have a horse of my own and I absolutely adore stories about them or with them in it.  Centaurs count in that adoration of mine, so really I just had to read the story.  Unfortunately, the promise of horsetasticness just never came through.

It’s presented almost as if the author wants it seen as a dystopia (this is conjecture on my part).  However, there is a decided lack of world building (as in, zero world building) and there are just too many unanswered questions to make the story flow in my head.  Why is the world this way? Why are things happening the way they’re happening? It fell truly flat of its promised excellence and I feel incredibly disappointed having read it.

There are some good points. The main character is fun; she seems like she’s a tough girl with a good attitude and the desire to make things happen.  But…she’s also kind of one dimensional in places and doesn’t live up to the personality we’re lead to believe she has at first.  The first part of the book I really liked – fans of ‘survival’ type stories may enjoy it (e.g.; Swiss Family Robinson, Island of the Blue Dolphins, etc. though I am in no way saying the quality of this story can really compete with those two).  There are also a few supporting characters who are quite interesting to read about.  Once the centaurs enter the picture, though, the story loses something – even with the bits and pieces of niceness thrown in.

I will say, the author seems to either be familiar with horses and horse training or has done some decent research.  A fair amount of what she showed with the interaction between Malora and the horses was spot on.

There’s a few other plot points that bug me, and then the whole pussemboos race of servant folk who LIKE being almost slave-like thing really turns me off.  A race of beings who are brilliant and creative but who live for nothing but serving? Give me a break.  (And yes, pussemboos…as in Puss in Boots…as in the nursery rhyme….) Argh.  No. Just no.