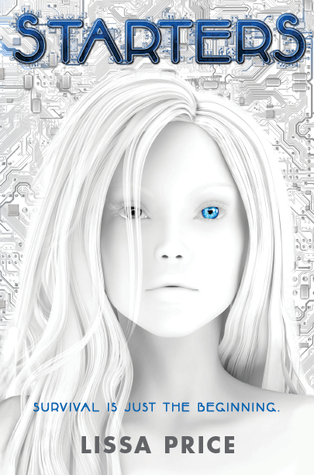 Where’d I Get It: for review from the publisher

Synopsis (From Goodreads):  Callie lost her parents when the Spore Wars wiped out everyone between the ages of twenty and sixty. She and her little brother, Tyler, go on the run, living as squatters with their friend Michael and fighting off renegades who would kill them for a cookie. Callie’s only hope is Prime Destinations, a disturbing place in Beverly Hills run by a mysterious figure known as the Old Man.

He hires teens to rent their bodies to Enders—seniors who want to be young again. Callie, desperate for the money that will keep her, Tyler, and Michael alive, agrees to be a donor. But the neurochip they place in Callie’s head malfunctions and she wakes up in the life of her renter, living in her mansion, driving her cars, and going out with a senator’s grandson. It feels almost like a fairy tale, until Callie discovers that her renter intends to do more than party—and that Prime Destinations’ plans are more evil than Callie could ever have imagined….

My Thoughts: This has been, by far, the most difficult review I’ve written in 2012, and I’m not even sure why. Perhaps because I’m so conflicted – I loved the story; the characters, the premise, the writing style, were great…but there’s quite a few holes in the plot that made me slightly uneasy. I have questions about the war with the spores and the missiles. I have some thoughts on the ages of people in the book and how things would have affected each part of the demographic, and a few other things. In the end, I decided that those imperfections and unanswered questions were not enough, in MY opinion, to fuss over.

Starters had me from the very beginning – I absolutely fell.in.love. with Callie, Tyler, and Michael before the first chapter had even come to a close. It wasn’t even that they were incredibly well developed at that point (it wasn’t far enough in the book for that; this isn’t a flaw!), it was simply that the story was poignant and relateable and the writing was detailed and lovely enough to make you want to reach in and hug those poor kids close. Maybe it’s the mommy in me, but I wanted to bring them all home – and I certainly was interested in what was happening to them in the book.

Interestingly enough, Ms. Price did not assign a hair or eye color to Callie.  It wasn’t til the end of the book that I realized I’d been imagining her as a dark haired, green eyed, exotic beauty.  The cover, with its stark whites and greys and startling eyes, was an enigma to me initially – but I get it now. Viewed after reading the story, it makes so much more sense, and is definitely more beautiful.

As far as plot, setting, and all – well, again, there’s some gaps.  There’s some world building in place, and it’s definitely enough to bring the story forward and not leave the reader flailing for more information, but I’d have liked more detail.

The pace was -fantastic-. There are very few, if any, spots that drag on. Forward momentum is maintained steadily and characters develop in a believable time frame. As far as grammatical issues, I’m sure there’s probably some there, but I was so interested in the story that I didn’t notice.  That, to me, counts for a lot.  There -is- a sort of love triangle in the book, but it’s not overwhelming and again, it’s believable.

Starter’s end left me wide eyed and wanting more. It’s a cliffhanger, of sorts, but it’s the type that is rife with suspense and intrigue and sets things up perfectly to flow into the next book.

All in all, I truly and honestly loved this book and I will be reading the 2nd and last in the series, Enders. I’ll be buying copies for my nephews and a copy for myself. Starters is a poignant tale of survival, love, consequence, and growth that will grab the reader from the start and leave you breathless at the end.

Great review, falling in love before the end of the first chapter? Wow!
Thanks so much for the giveaway, looking forward to reading this one. 🙂

Great Review, I feel the same way.
Also, not truly knowing who everyone was throughout the book made it harder to write my review too. (:

Really liked your review! =) I don’t know if this is my cup of tea, but who knows… I may check it out someday. It does sound pretty interesting, though!