My Name is Memory by Ann Brashares 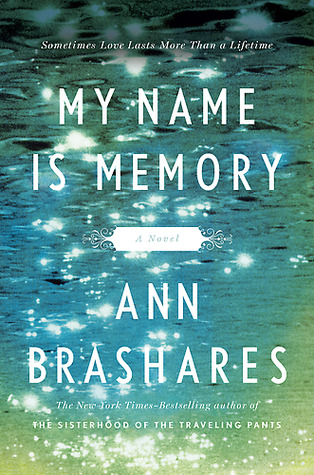 Synopsis (From Goodreads): Daniel has spent centuries falling in love with the same girl. Life after life, crossing continents and dynasties, he and Sophia (despite her changing name and form) have been drawn together-and he remembers it all. Daniel has “the memory”, the ability to recall past lives and recognize souls of those he’s previously known. It is a gift and a curse. For all the times that he and Sophia have been drawn together throughout history, they have also been torn painfully, fatally, apart. A love always too short.

My Thoughts: If you’re looking for a not-so-typical love story, this is the book for you. Ann Brashares brings to life a story of love, redemption, faith, and retribution.  It’s a story full of twists and turns with a lot of lovely detail, but flows smoothly and easily enough to keep the attention of even the most casual of readers.

I was drawn into the story from the beginning and became invested in the characters almost immediately.  They are likable and believable and they grow through the story. Daniel is deep, Lucy is sweet, and the villain is just villainous enough to make you want to scratch his eyes out.  Totally love it.

What I think truly got me, though, was the beautiful prose.  Brashares quite possibly could have written absolute drivel and made it sound good; she’s able to weave words into a gorgeous tapestry of literary goodness that really must be acknowledged.

Now, despite all that glowing happy lovie yayness, I have to say I -hated- the ending. I loathed it. It was a cliffhanger of epic proportions…and there’s absolutely no promise of a sequel in what was once proposed to be (and apparently written to be part of) a trilogy.  Were it not for the ending, it’d have been a 4 star review; since there’s absolutely no resolution to the story, however, I knocked one star off.

You should still read it – just don’t expect the ending to be tied up in a nice little bow.

This actually sounds pretty good. This is the first I’ve heard of it. I love cliff hanger endings… only when I know for sure that there is a sequel. I think I might have to read this one. Thank you for the review. 🙂

Krystianna, if you go into it knowing that you’ll be wanting more at the end, at least it’s not a shock. When I finished it, I immediate when to BarnesAndNoble.com looking for the sequel or at least a release date for a sequel only to find…nothing. Then some googling told me that there was no sequel and possibly never would be because of a lack of interest in the book. Now -that- was shocking!

I have to agree with you about the ending. I really enjoyed the book (for the most part, I felt pretty frustrated that Lucy just couldn’t/wouldn’t REMEMBER!) and I was so upset by the ending. I didn’t know that it was going to be a trilogy, that would have made a lot more sense!

A-M-A-Z-I-N-G book…make everyone you know read it so the publisher will allow for book two and perhaps three as well. I really want to know what happens next; its such a wonderfully written experience its a shame that we may never know the ending.

I just finished reading My Name is Memory and am SOO disappointed that there may not be a sequel!!! I could tell it was not looking good for a nicely wrapped up ending when I was a few chapters from the end. I loved the book, but I HATE cliff hanger endings. 🙁 If I would have read this posting before, I might not have even read the book!

My friend at work and I both just finished the book and I did the same thing as apparently everyone else.. went searching for a sequel. There are so many questions and things we need to find out. Please please please write a sequel. It is very unfair to leave readers hanging like this. There should be responsibility to the fans!!

Just finished it. Loved it!! I couldn’t stop reading it. When will the second be out!? And what is it called so I may look for it!?

Maybe we should write to the publishers and generate some buzz so that they will green light a sequel. =)